ABC Wednesday - Z is for Zone 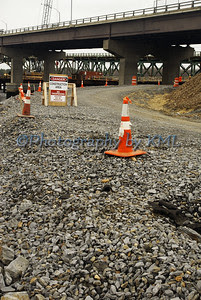 This construction zone has been this way for over a year now.

This bridge spans the Great Bay between Dover Point and Newington.

The bridge in the fore ground is the "new" one that has been in service for about 25 years.

The green one behind it is the old one that was banned to all traffic once the new one was opened.

It will be used for foot traffic once it is made safe.

FYI - when Google maps was made - they didn't include this bridge in their map configurations.

They would send travelers from Dover all the way around the bay, through Maine, then up along the other side of the bay to get them to Newington.

It made national news when this was discovered - we all had a good chuckle over that little oversight.

It was a good thirty mile plus trip around for those who weren't familiar with the area for what is just a quick drive over a bridge.


This is the ninth round of ABC Wednesday. If you would like to join in please visit this site for the details.