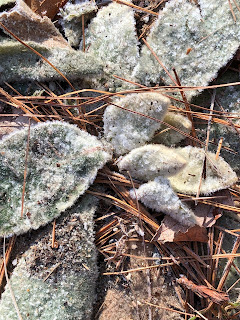 Mullein leaves covered in frost on a cold New Years Day
Snow is expected tonight so tomorrow will find these fuzzy leaves covered once again.
Mullein happily grows in poor sandy soil and can often be found alongside the road in the summer.
This was a first year plant as there were no dried flowering stalks left over from the past year.
It is also very small as these plants and leaves can be quite large  - I've seen them taller than me.
Valued for it's respiratory health properties, it can be harvested and dried when it is in season so it can be used when it is needed year round.
The leaves are covered in fine hairs which can be an irritant to the throat if they are used in a tea, so it needs to be strained well before drinking.
Viewed as a common weed by many, it is a gift from Mother Nature to those who recognize its worth.
.
Posted by KML at 8:02 PM